It can happen: you are injured by a vehicle that was not insured. Are you out of luck? The answer is that you certainly don’t have to be. You can protect yourself from this scenario if you carry uninsured/underinsurance coverage on your automobile.  This inexpensive coverage provides help in two important ways.

Let’s say your car is hit by someone whose insurance has expired or they never had insurance. This driver is considered “uninsured” for purposes of making a claim against your own policy.

Also in this category is a “hit and run” accident or a case where the driver flees the scene without making himself known.  With a UM claim, your own insurance company would honor the claim as though the other party had insurance and pay the value of your claim.

If you are in an accident and you or your passengers suffer significant injuries, the at-fault vehicle may not have enough insurance to cover the value of the injuries.  This person would be considered an “underinsured” driver because they carry some insurance but not enough.

For example, if you were injured in an accident and the at-fault party carries only the state minimum $20,000 policy limit, the claimant could only collect a maximum of $20,000 from the insurance policy of the vehicle that caused the accident.

How Much Does This Type of Coverage Cost?

This sounds like it would be expensive, but for most people it only costs a few dollars per month. Also, it covers you when occupying your auto, when you are occupying an auto you do not own, or if you are injured as a pedestrian. It also covers your household members.

We have seen many instances where claimants would qualify for uninsured/underinsured benefits but were unaware that such coverage was available.  Fortunately, we have been able to recover hundreds of thousands of additional dollars for people by accessing this type of coverage.

Of course, in these scenarios, you could still sue the at-fault driver and vehicle owner for your damages, but in many instances, these folks are judgment-proof and the reality is that it is very tough to collect judgments from people instead of insurers.

Insurance coverage provides peace of mind and can protect you from the negligence of others. We continuously see the effects when people fail to plan and the unfortunate happens. We encourage people to have a conversation with an insurance agent to avoid unnecessary risk and potential disaster.

by Neil P. Crowley
Personal injury attorney for vehicle and construction accident, premises liability and wrongful death cases.
Be the first to comment!
Post a Comment 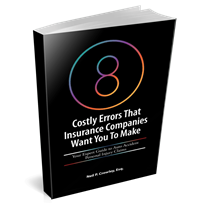 "I am extremely satisfied with the results of my case and will always be grateful for his support." Arber M.